Hundreds of suspected and convicted football hooligans, who are subject to banning orders, have been called to surrender their passports to the police or face arrest.

An estimated 1,900 football fans are banned from attending this year’s World Cup in Russia, which is due to kick off on June 14. Up to 132 of them are on Scotland Yard’s watch list.

Sergeant Dave Hine of the Met’s Football Unit said: “We want to ensure that no fan who is subject to a football banning order is able to travel through Heathrow Airport to the World Cup to watch England.

“Anyone with a banning order who fails to hand their passport in during the next couple of days will have a police officer knocking on their door.”

A banning order can last up to three years and can be issued by courts after someone is convicted of football-related offences. They are issued in an attempt to prevent violence and disorder at matches both at home and abroad.

In the capital, Met police officers from the Football Unit have been stationed around London on Monday and Tuesday to collect the documents.

Elsewhere in the UK, West Midlands police has called on 214 affected people in the area to follow suit, the BBC reports.

A total of 23 people are subject to a banning order in Cheshire and are being urged by Superintendent Richard Rees, overseeing the police unit in the country, to hand their passports in or risk prosecution. 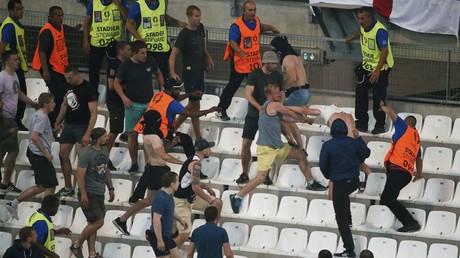 In addition to surrendering their passports, banned individuals must also inform authorities if they move house.

Despite the significant drop off in violent incidents in recent years, the threat of hooliganism among English fans is ever present. English and Russian fans made the headlines two years ago when violent clashes erupted during a Euro 2016 match in Marseille, France. Supporters from both teams were arrested by French police, while the UEFA also threatened to disqualify the parties if such fighting reoccurred.

More recently, English football fans’ behavior in Amsterdam was branded “appalling” by the National Police Chiefs’ Council [NPCC] after they got involved in clashes with Dutch police in March. 25 people were detained after they threw glass bottles at officers during clashes before a friendly match with the Netherlands. Another 90 were handcuffed after clashes that followed the game.

According to the latest statistics, however, which date to August 7, 2017, there has been a steady decrease in the number of banning orders issued on English hooligans in the past six seasons since November 2011, falling 39 percent from 3,174.