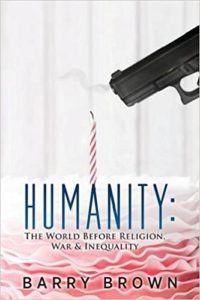 In the groundbreaking work, Humanity: The World Before Religion, War, and Inequality, author Barry Brown has provided definitive evidence of humankind’s natural tendency to be peaceful, cooperative, and egalitarian. Brown’s work is the first ever to document the history of humankind before and after the advent of warfare. Brown takes the reader on a tour de force through humanity’s prehistory as well as providing detailed evidence about ancient mysteries such as the Venus statues, the original meaning of the swastika, his theory about the location of the Garden of Eden, and the real purpose of the Gobekli Tepe site, an enigmatic archaeological site in southeast Turkey.

Brown’s background as a journalist is his greatest asset, as he makes connections that are seemingly overlooked and/or downplayed by the world’s leading archaeologists, paleontologists, historians, and even evolutionary biologists.

One of Brown’s main supporting arguments can be found in a Scientific American essay which elucidates the nearly completely non-violent behaviors of chimpanzees and bonobos, our closest living ancestors, as well as the early fossil record of hominids, where no group warfare among masses of people is found before the advent of agriculture, cities, and hierarchies. This indicates that our biological nature is peace-loving, and that our tendency towards group violence has become normalized due to propaganda, socialization, and cultural factors. Although small…