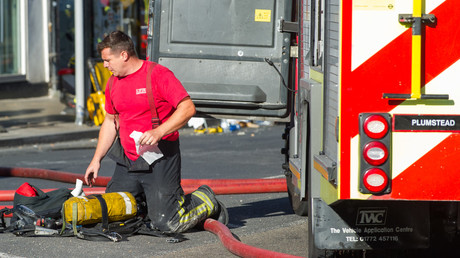 A huge fire has broken out in a 22-storey residential building in east London. It’s the second blaze to rip through a London tower block in just two days.

Smoke can be seen billowing into the sky from the 12th-floor flat in a block on Wellington Way, Mile End. The Fire Brigade confirmed half of the flat was set alight, but said rescuers had managed to reach the floor and bring the blaze under control.

Another witness claimed she could see the fire all the way from Shoreditch, and described it as “really bad.”

There is a Tower Block in Mile End, London on fire. Fire fighters are attending to it. Pray that everyone is getting out safe. pic.twitter.com/ZN1lHI3KTN

A large fire has broken out at a tower block in east London: Grafton House in Mile End.

Does not ::appear:: to have spread externally (pic: @LondonFire) pic.twitter.com/pa2t9Aux7Y

It comes after another huge fire erupted at a luxurious sixth-floor apartment in a tower block in Battersea, south west London, on Wednesday.

Flames and smoke poured out onto a balcony in one of the properties where apartments are marketed at £1 million each.