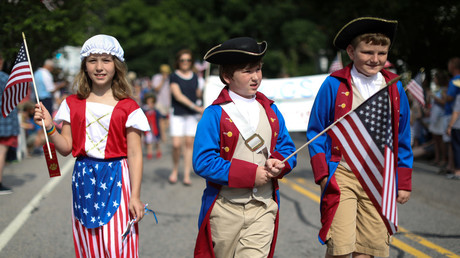 The UK’s Independent newspaper got more than it bargained for when it published an article sarcastically asking how independence from the former British Empire was working out for Americans — on the 4th of July.

The article criticized the “bulbous shape” of US President Donald Trump, the “abysmally sycophantic shape” of both houses of Congress and the “atrophied state” of the judiciary. The author also blasted Trump’s so-called “Muslim ban” and wrote that the US was a land that “steals and incarcerates brown-skinned babies” in a reference to Trump’s “zero-tolerance” immigration policies.

But Americans were having none of it — and they took to Twitter to let the Independent know about it. Some Twitter users pointed out through memes that a British publication should probably not be lecturing the US on that day in particular, given the fact that it was the British Empire that the Thirteen Colonies declared independence from in 1776.

Others sarcastically referenced instances of what they see as a lack of freedom in the UK, including the jailing of a number of people for offensive tweets and Facebook posts — and another incident where an elderly man with Alzheimer’s was tasered by police for carrying a butter knife.

Remember when Trump put Americans in jail because of a tweet? Oh yeah that’s happening in Britain not America.

America might have a bit of a cold right now but we aren’t confiscating butter knives so we have that going for us, which is nice.

Some users suggested that the British should thank the US because they’re “not speaking German” — a reference to the US’ role in World War Two, which would probably raise eyebrows in Russia, the country that did the most to defeat Nazi Germany during the war.

How’s not speaking German working out for you? You’re welcome!

Noticing that you did not type this in German. 🇺🇸🇺🇸🇺🇸🇺🇸🇺🇸🇺🇸🇺🇸🇺🇸 pic.twitter.com/mlR91halVU

This tweet was written in English and not German, so hows it working out for you?

Brexit came up too, with one tweeter joking that Americans were actually the “original Brexiters” who did it “before it was cool.”

…and others were happy to let GIFs do the talking for them.