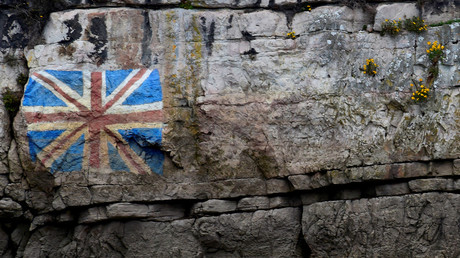 English Conservative voters are so completely committed to Brexit — no matter what — that they are even willing to sacrifice the territorial integrity of the United Kingdom to make it happen. What kind of ‘union’ is this, exactly?

It’s not just a few of them who are thinking that way, either. Large majorities of English Tory voters would be willing to support Scottish independence (79 percent) or even the undoing of the Northern Ireland peace process (75 percent) as “worth it” to “take back control” from the European Union, new research from the Universities of Edinburgh and Cardiff has suggested.

Even more shockingly, a huge majority (87 percent) of ‘Leave’ voters in Northern Ireland itself see the potential unravelling of the peace process as an acceptable price to pay to ensure Brexit goes ahead. In contrast, just one of the NI respondents who voted Remain (which was the overall majority in NI) said Brexit was more important than peace.

To put this in context, it’s important to understand that the NI ‘Leave’ voters are typically DUP supporters who believe most passionately in maintaining the union with Britain — but rather inexplicably, a huge 86 percent of them said that Scottish independence would also be worth the price, despite the fact that it could precipitate the breakup of the entire union — which they have historically treasured.  One of the biggest sticking points in Brexit negotiations has been what to do about the border between Northern Ireland and the Republic of Ireland, so it is surprising to see that unionists, of all people, could take a blasé attitude to the statelet’s potential future breakaway — yet, Brexit seems to trump everything.

The surveys also found that nearly half (49 percent) of English Tory voters don’t believe Scottish MPs should sit in the UK cabinet — and 24 percent of Scottish Conservatives don’t want Scots MPs in the cabinet either. Significant numbers of English conservatives also believe that when it comes to government spending, England gets less than its fair share (41 percent) while Scotland gets more than its fair share (52 percent).

Tellingly, taxpayers in the UK’s four nations are not exactly delighted to see their taxes spent in any other jurisdiction, particularly when that jurisdiction is mentioned by name. Majorities of English, Scottish and Welsh respondents all felt that revenues raised from taxes should be spent in the jurisdiction where they were raised and not distributed to support public services anywhere else.

The results of these surveys beg the obvious question: What kind of ‘union’ is this, really? It is now abundantly clear that the bonds between members are eroding and the four nations are drifting apart — and have been for some time.

The researchers said the results revealed “attitudes to the union marked principally by rivalry and mutual indifference”.

Indeed, rather than a strong union of four nations, it resembles what Glasgow-based Irish writer Peter Geoghegan calls a “zombie union”— in other words, “not yet dead but listless, inert and lacking the vital human spark that nations, like people, need to prosper”.

Ailsa Henderson, a Professor of Political Science at the University of Edinburgh, said that the research suggested that Leave voters — but not exclusively Leave voters — are actually relaxed about a potentially “fundamental transformation” of the union.

“If even Unionists in Northern Ireland care less about the territorial integrity of the UK than pursuing Brexit, then it really raises questions about the type of union we’re in, and indeed what Unionism means.”

Could all of this have something to do with why British Prime Minister Theresa May recently announced plans for a ‘Festival of Great Britain and Northern Ireland’ to happen in 2022 in an effort strengthen what she calls “our precious union”? The move reeks of insecurity at a time when it is more than obvious that the “precious union” is not so strong and stable after all.

Notably, the centenary of the partition of Ireland and the creation of Northern Ireland in 2021 was nowhere mentioned on the agenda. Perhaps that is because, as we approach this sensitive anniversary and the threat of conflict hangs over the North again, there has never been more serious talk of this outpost of the union breaking away and rejoining the rest of Ireland.

READ MORE:United Ireland? It may not be as far off as you think

By no means does Brexit mean that the breakup of the UK is inevitable, but it has certainly made the prospect far more likely than it ever was before. In August, former Belgian prime minister and European council president Herman Van Rompuy commented that a no-deal Brexit posed an “existential threat” to the UK. It is not exaggeration. The volatility that could be unleashed by a bad or no-deal Brexit deal could be massive.