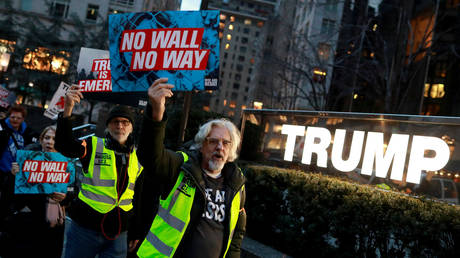 The Democrat-controlled House has voted to block President Donald Trump from declaring the emergency he needs to build his wall, but the votes fell short of the two-thirds majority required to override a presidential veto.

Democrats were united against the emergency, and even 13 Republicans said no to the declaration, seeking to deprive Trump of the authority to build his wall. The bill now goes to the Republican-controlled Senate, where its passage is uncertain, with some in the president’s own party voicing doubts about the wisdom of an emergency declaration. Trump has vowed to veto the bill if it makes it past both chambers.

Trump announced the emergency earlier this month after he was unable to secure the $5.6 billion needed to fund the construction of the border wall through congressional negotiations. Under the emergency, he would appropriate a total of $8 billion previously approved by Congress for other purposes.


Opponents of the emergency within the Republican party fear it sets a dangerous precedent for future presidents who may want to bypass Congress with “radical” legislation – a fear House Speaker Nancy Pelosi has encouraged by warning that a Democratic president could use such a move to enact stricter gun control laws, which have historically stalled in Congress.

Congress isn’t the only government body rising up in opposition to Trump’s border emergency. The attorneys general of 16 states are suing to block the emergency declaration, and 58 former national security officials have published an open letter denouncing the move.