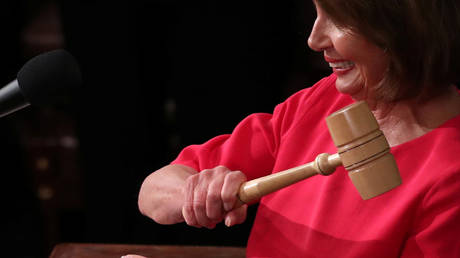 US Democratic Speaker of the House Nancy Pelosi’s plan to end the government shutdown passed the House with flying colors, though without funding for a southern border wall it’s almost certain to be vetoed by President Trump.

The House passed a pair of bills that would fund the Department of Homeland Security at existing levels through February 8, supplying $1.3 billion for “border fencing” and another $300 million for miscellaneous border security measures like cameras and other surveillance tech; the other bill would keep currently unfunded federal agencies like the Departments of Agriculture, Commerce, Justice, and Interior open through the end of the fiscal year.


Conspicuously absent is $5 billion in funding for the president’s wall, without which he has vowed to veto any legislation. Accompanied by border patrol agents in an unannounced press conference earlier on Thursday, Trump made the case for his wall yet again. He also congratulated Pelosi on her election as Speaker by the new Democratic majority, adding “Hopefully, we’re going to work together.”

Senate Republican majority leader Mitch McConnell said yesterday that the Senate wouldn’t even “waste the time” looking at the Democrats’ bill, since Trump was guaranteed to veto anything that didn’t fund his wall. Trump is due to meet with congressional leaders in the White House for continued negotiations on Friday.