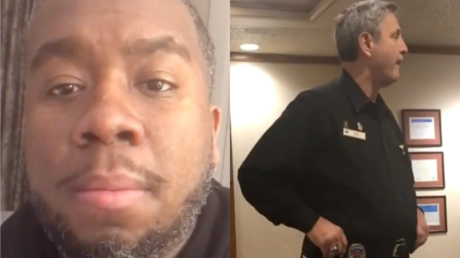 In the latest example of people calling the cops because a black person is doing something completely ordinary, an Oregon hotel has fired two of its employees after they called the police on a guest who was talking on his phone.

The DoubleTree by Hilton hotel in Portland wrote on Twitter on Saturday that they have “terminated the employment of the two men involved” because their actions “were inconsistent with our standards & values.”

We have terminated the employment of the two men involved in the mistreatment of Mr. Massey. Their actions were inconsistent with our standards & values. We reiterate our sincere apology for what he endured & will work with diversity experts to ensure this never happens again.

Washington state resident Jermaine Massey, 34, was a guest at the hotel when a security guard called police to remove him from the lobby on December 22. Massey posted video footage showing parts of the incident, in it Massey can be heard telling the guard that he is staying at the hotel, to which the man wearing a name badge that reads ‘Earl’ replied “not anymore.”

The Instagram video shows Massey repeatedly asking the guard and another employee why they are calling the cops on him. The other employee responds that the guard “wouldn’t ask me to call 911 without any cause.” Massey shows the employees his room key but the video ends with a Portland Police Bureau officer say that the security guard is “in control of the property.”

Massey’s attorneys are reportedly intending to pursue legal action against the hotel for what they say was a racial profiling incident. The hotel apologized to Massey via Twitter on Friday, after announcing that the two employees involved in the incident had been placed on leave pending an investigation.