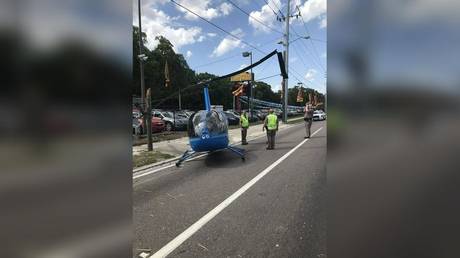 Tragedy struck out of nowhere on Thursday when a helicopter fell out of the sky onto a busy highway. One of the aircraft’s rotor blades shattered on impact and flew off, striking a pickup truck, killing the driver instantly.

The helicopter was carrying two people, described as highly trained pilots, in Sarasota, Florida when the incident occurred. The helicopter’s engine reportedly failed at roughly 2:20pm local time, forcing the pilots to make a hard landing on a busy road, with fatal consequences. CCTV footage of the exact moment of impact has been shared online.

A man driving a Chevrolet Silverado pickup truck was struck by the helicopter’s rotor blade, and was pronounced dead at the scene. His son, who was in the passenger seat, was taken to Tampa General Hospital, where his condition is unknown. The two pilots on board the helicopter emerged unscathed.

“Bro, this helicopter just fell out of the sky!”

A young man who works right near the intersection of 50th and Palm River Rd shared this video with me right after the chopper crash-landed. @wflapic.twitter.com/iiu9FZBpQK

All lanes adjacent to the crash site were temporarily closed for a period of six to 12 hours while preliminary forensic investigations were carried out.

#BREAKING: one person is dead after a helicopter suffered engine failure and crash landed at 50th and Palm River Rd. Rotor blade struck a passing truck, killing a passenger inside. No other injuries reported. @wflapic.twitter.com/56KPbFUEYl

Police have yet to release the name of the man killed in the freak accident.

HELICOPTER CRASH #teamhcso is on scene on 50th and Palm River where a private helicopter crashed. Traffic is locked down all around, find an alternate route. More details to come. pic.twitter.com/ywv8RKXkiA