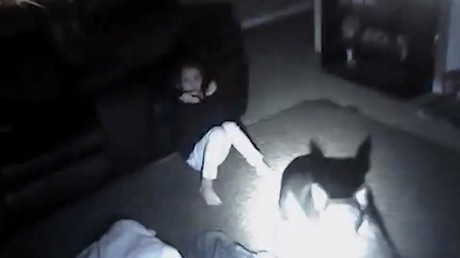 Police bodycam footage showing a Wichita officer firing at a family dog and injuring a 9-year-old girl with bullet fragments has been released. The child can be heard screaming as she is hit.

The incident happened in December 2017, when police responded to a 911 call made by Danielle Maples after her husband threatened suicide.

Police officer Dexter Betts entered the home where the couple’s four children were sitting in the living room along with the family dog. The bodycam footage shows Betts in the living room where he says, “we got a dog inside here, too,” before a dog appears on screen moving and barking.

Betts then fired at the bull terrier. One of the two bullets ricocheted off the floor and fragments hit the 9 year-old girl, sitting just behind the pet, above her eye.

Sedgwick County DA Marc Bennett released the footage to the Wichita Eagle on Thursday after parts of it were shown in court last week.

“Ow! Ow! Ow, you hurt my eye! Ow! Ow!” the girl can be heard screaming. Betts tells the children to get out and can be heard telling someone over the police radio that the “dog inside attacked us.”

Maples and her husband were in the front yard when the shooting took place. The family has pushed for the video’s release for months.

Betts was fired over the incident and is currently in court for a felony charge of aggravated battery. He has pled not guilty and his lawyers have argued that the dog was attacking him when he fired his weapon. His trial is to take place in August.