A homeless man who was hailed a ‘hero’ for aiding victims of the Manchester Arena bombing has admitted robbing a woman as her teenage granddaughter lay dying. He pleaded guilty to swiping a phone and a purse amid the chaos.

Chris Parker, 33, was praised globally after he described comforting victims of the bombing that killed 22 people and injured hundreds more on May 22, 2017. What he failed to mention, however, was how he stole the personal belongings of those injured in the blast.

Parker, who now lives in Halifax, West Yorkshire, initially denied claims that he had robbed victims wounded in the suicide attack. 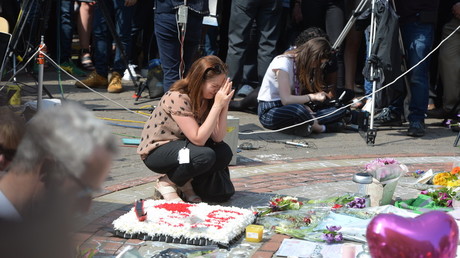 Pauline Healey, her 14-year-old granddaughter Sorrell Leczkowski, and Sorrell’s mother Samantha Leczkowski, did not attend the Ariana Grande concert but were meeting up with someone who had been at the gig when Islamist Salman Abedi detonated his homemade device.

On Wednesday, Parker pleaded guilty to stealing Healey’s purse after previously denying the charge. He was captured on CCTV repeatedly returning to critically injured Healey before leaning across her and swiping her purse, as 14-year-old Sorrell Leczkowski lay dying nearby.

A few hours later he was allegedly in McDonalds, using Healy’s bank cards to pay for food while she was fighting for her life in hospital. He also took Healey’s iPhone 6. She required 15 hours of surgery to remove shrapnel from her body, and suffered multiple compound fractures to her arms and legs. Sorrell’s mother was also seriously injured in the blast.

Parker also pleaded guilty to fraud and the theft of a mobile phone belonging to a teenage girl, who could not be named in court due to her age.

He was due to stand trial on Tuesday, but failed to show up in court. The case was adjourned while police searched for the accused, who was found hiding in a loft in Halifax.

Parker, who the court described as being of no fixed abode, is facing a total of eight charges. He pleaded not guilty to the attempted theft of a coat of an unknown person, and not guilty to three counts of fraud, which included the use of Healey’s bank cards in Tesco Deansgate, Transport for Greater Manchester, and McDonalds in Manchester between May 24 and May 26. He will be sentenced on January 30.