Arts and crafts chain, Hobby Lobby, will return 5,500 ancient Iraqi religious artifacts which were smuggled into the US through Israel and the United Arab Emirates as a result of a civil complaint from the US Justice Department.

Hobby Lobby announced on Wednesday that it has agreed to return the artifacts and pay a $3 million dollar fine because of its illegal importation practices.

In 2010, the president of Hobby Lobby, Steve Green, personally purchased $1.6 million worth of cuneiform tablets, bricks, clay bullae and cylinder seals, according to a DOJ press release. 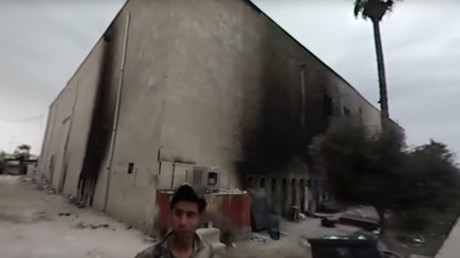 In October 2010, an expert on property law hired by Hobby Lobby’s in-house counsel warned the company that the artifacts “may have been looted from archaeological sites in Iraq,” according to the press release. Green traveled to the UAE to personally inspect the artifacts before the acquisition. Hobby Lobby went through with the transaction despite all the warnings.

The DOJ press release states that Hobby Lobby had not met or had communications with the original dealer who was said to have owned the artifacts. The company also didn’t pay the purported owner, but rather transferred money into seven other people’s bank accounts given to Hobby Lobby by a different dealer.

The civil complaint charges that a dealer based in the UAE shipped the packages of artifacts to three different corporate addresses in Oklahoma City with the consent of Hobby Lobby. Between one and three shipments came in at a time and the required customs entry documentation was purportedly not filed with the US Customs and Border Protection (CBP).

Shipping labels “falsely” described the contents of the packages as “clay tiles (samples),” or “ceramic tiles,” the DOJ said.

CBP intercepted five of the 10 shipments that were sent. All of the packages’ shipment labels were falsified to say that they were from Turkey, according to the DOJ.

It wasn’t until September 2011 that more shipments came through. This time, 1,000 clay bullae were shipped by an Israeli dealer and falsified to say that the country of origin was Israel, not Iraq.

Hobby Lobby acquired the artifacts so that they could provide access to scholars and preserve the artifacts for future generations, according to a statement released by the company.

“The company was new to the world of acquiring these items, and did not fully appreciate the complexities of the acquisitions process. This resulted in some regrettable mistakes,” Hobby Lobby said in a statement.

“American collectors and importers must insure compliance with laws and regulations that require truthful declarations to US Customs and Border Protection, so that Customs officers are able to scrutinize cultural property crossing our borders and prevent the inappropriate entry of such property,” acting US Attorney Bridget M. Rohde said. “If they do not and shippers use false declarations to try to clandestinely enter property into the United States, this Office and our law enforcement partners will discover the deceit and seize the property,” Rohde added.

Special Agent-in-Charge Angel M. Melendez said, “The protection of cultural heritage is a mission that HSI and its partner US Customs and Border Protection take very seriously as we recognize that while some may put a price on these artifacts, the people of Iraq consider them priceless.”

Hobby Lobby will now submit quarterly reports to the government detailing any cultural property acquisitions for the next 18 months, according to the DOJ press release.

The company has been involved in high profile cases in the past. In 2014, Hobby Lobby took on the administration of former President Barack Obama over the birth control mandate in Obamacare. They took their case to the Supreme Court and won.