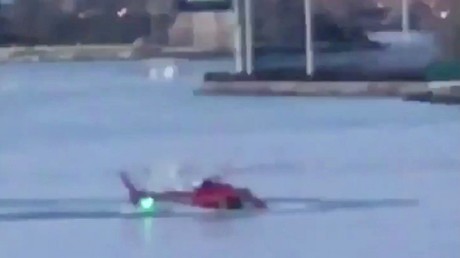 At least two people have been killed and several remain missing after a passenger helicopter crashed in New York City, according to officials and media reports.

One person has been rescued from the water alive so far, while two more were confirmed dead, according to New York Mayor Bill de Blasio’s spokesman Eric Phillips.

“Divers are still in the water,” Phillips added, referring to the city’s police and fire department officers.

Emergency divers were seen in the water around the partially-submerged and upside-down wreck of the Eurocopter AS350. The Fire Department tweeted that its crews were present at the site, near 91st Street in Manhattan.

An unverified amateur video of the crash has emerged, showing a red helicopter coming down with a large splash at dusk, before capsizing onto its right side. It was captured by an alleged eyewitness, who posted it in his Twitter acount, ‘JJ Magers’.

Roosevelt Island resident Xinran Jiang said she and her husband also saw the red helicopter descending rapidly at about 7:08 pm, the New York Times reports. “It almost looked like it was landing,” Jiang said. “It wasn’t moving fast. We were curious where it was going to land. Then the next minute, it was diving into the river.”

Now many boats and helicopters surrounded the area, and I hope whoever was on that object survived the crash and cold river. pic.twitter.com/nap0udtfBA

Arpi Gettings said she was finishing dinner with friends in her apartment on East 92nd Street in Manhattan when they witnessed the crash. “It caught our attention because it was going really fast toward the river,” she said. “Then it went more steady and it crashed into the river.” Gettings said she saw what she took to be an orange life raft near the crashed chopper, but not whether anyone made it out or to the life raft.

The Federal Aviation Administration said the aircraft went down off the northern end of Roosevelt Island, between Manhattan and Long Island, around 7:00pm. The agency said it was investigating the accident.