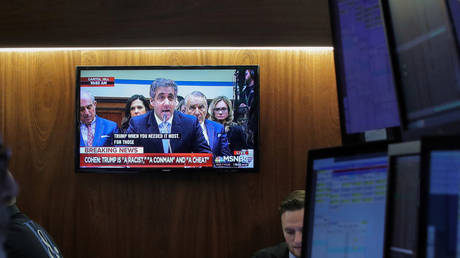 US President Donald Trump has accused his former lawyer Michael Cohen of lying “a lot” during his contentious Capitol Hill testimony, except for saying there was no collusion with so-called “Russian hoax.”

At a press briefing in Vietnam, a journalist asked the president what he made of Cohen’s statements that Trump was a “liar,” a “con-man” and a “racist.” Trump opted to skim by those claims and mostly focused on the collusion allegations.

“He lied a lot, but it was very interesting because he didn’t lie about one thing. He said ‘no collusion’ with the Russian hoax,” the US President said. “And I said, ‘I wonder why he didn’t just lie about that too like he did about everything else.”

Trump noted collusion was the most important question asked during Wednesday’s hearing. He slammed the hearing as “fake” and “shameful,” and said it was a “terrible thing” for Democrats to hold it during his summit with Kim Jong-un.

“I wouldn’t use the word ‘colluding.’ Was there something odd about the back-and-forth praise with President Putin?” Cohen said. “Yes, but I’m not really sure I can answer that question in terms of collusion,” he admitted.


“I was actually impressed that he didn’t say ‘well, I think there was collusion’,” Trump commented, habitually branding the testimony “the witch hunt” that “should never happen to another president.”

The seven-hour Cohen testimony took place on Wednesday, with the lawyer claiming, among other things, that the president directed him to lie about a Trump Tower project in Moscow during his election campaign, and that he knew that there would be a leak of emails damaging to Hillary Clinton’s campaign. He also accused Trump of financial manipulations that may carry criminal charges.