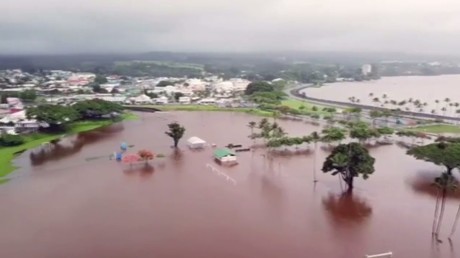 Striking new drone footage captured from above the Hawaiian town of Hilo shows the scale of devastating flooding after Hurricane Lane tore through the Pacific Islands on Friday.

Thousands were left without power after torrential downpour dumped 35 inches of rain across Big Island in just 48 hours. Video filmed from the air above the coastal town of Hilo shows extensive flooding around built-up areas as a layer of grey cloud hangs ominously low over the land.

Residents reportedly used sandbags to try and protect their homes from the flooding, an event that will likely further hit the island’s lucrative tourism industry following the eruption of Kilauea volcano last month. The Hawaii Star Advertiser reported that Hurricane Lane has dumped nearly three feet of rain on parts of Big Island, sparking a number of landslides that have inhibited the recovery effort.

The hurricane was downgraded to a tropical storm in the early hours of Saturday, but authorities said they still expected further flooding and damaging winds on parts of the island. US President Donald Trump had earlier declared a state of emergency for the state.