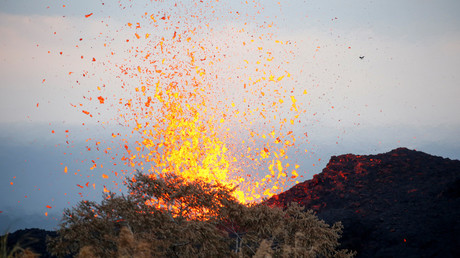 Lava flows from Kilauea volcano on the Big Island have reached Highway 137, threatening to cut off the escape route for lower Puna. While there is no immediate threat to the public, lava discharge is picking up the pace.

The flow of lava on parts of the Big Island is advancing at a pace of 1,000 feet in an hour, the County of Hawaii Civil Defense announced on Saturday, noting that by the end of the day lava could cross Highway 137, which leads to Puna district of the island.

“Residents should be aware that the lava flow is currently .8 miles from Highway 137 and, at the current rate, may cross the highway within the next four to seven hours,” Civil Defense said at 2 pm local time.

Earlier, a helicopter was deployed to airlift four people to safety, and at least four homes were destroyed in lower Puna, on Friday night and early Saturday morning.

“Residents between Kamaili and Pohoiki are advised to decide if they want to voluntarily leave the area at this time,” authorities added, while stopping short of ordering mandatory evacuations.

Hawaiian Volcano Observatory continues to monitor the lava flows from some 22 cracks which opened since May 3. As the lava is moving in the direction of MacKenzie State Park, locals are being advised to consider voluntarily evacuating.

However, instead some people have been flocking straight to the source, risking their lives to snap astounding and captivating pictures and videos of the natural phenomenon.

“There is much more stuff coming out of the ground and it’s going to produce flows that will move much further away,” said US Geological Survey scientist Wendy Stovall on a conference call with reporters, Reuters reports.