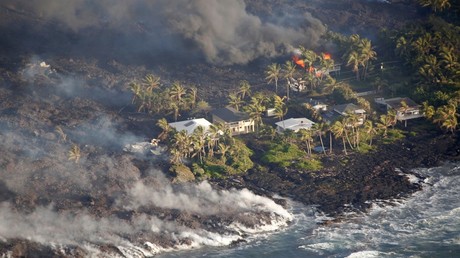 An astonishing 12,000 earthquakes have been recorded in Hawaii since the island nation’s Kilauea volcano erupted in early May.

Explosive activity at the shield volcano on the country’s Big Island has had a dramatic impact on the surrounding landscape. Fiery fountains on the volcano continue to spew matter up to 80 meters into the air. Meanwhile, huge fissures have opened up below Kilauea’s main vent, pushing rivers of lava towards homes and countryside.

Now the US Geological Survey (USGS) has revealed that Hawaii has also experienced around 12,000 earthquakes since the first eruption on May 4. According to the agency, seismic activity in the region has jumped from a historical monthly average of 1,000 earthquakes.

Many of the earth shakers have been relatively mild. However, the largest quake documented measured a magnitude of 6.9. Sitting above an active lava lake, the erupting Kilauea has now covered nearly 8 square miles of land with molten rock, with ash plumes rising overhead to 30,000 feet high. And while eruptions at the summit have decreased, toxic gas emissions are still high, according to authorities.

On Friday, the European Space Agency released satellite imagery showing the scale of Kilauea’s lava flow. The pictures from May 23 and June 7 reveal the destruction from one of the world’s most active volcanoes, with clouds of smoke seen coming from where lava has reached the sea.