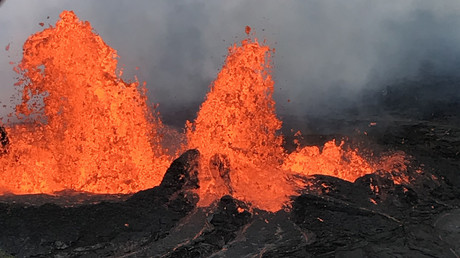 A geothermal power plant has been forced to completely shut down after Hawaii’s Kilauea volcano entered a more violent stage, shooting fountains of red into the vicinity and threatening the release of toxic gases from the site.

Crews at the Puna Geothermal Venture (PGV) plant worked overnight to cap the 11th and final well at the site, which provides 25 percent of the Big Island’s power.

The capping is the latest measure to be taken at the plant, which has been closed since Kilauea first erupted on May 3. Authorities previously removed the highly flammable chemical pentane from the site.

“County, state, and federal partners have been collaborating closely to monitor the situation and work with PGV to ensure the safety of the surrounding communities,” county officials said, as quoted by Reuters.

Kilauea has entered a more violent stage which has seen larger amounts of molten rock oozing from the ground and traveling a further distance. Its most recent eruption took place at around 6pm local time on Monday.

Lava began hitting the Pacific Ocean over the weekend, creating yet another hazard for the Big Island’s residents. That hazard is known as ‘laze,’ a mix of hydrochloric acid, steam, and fine glass particles which is created when hot lava hits the cooler sea water. It can cause lung, eye, and skin irritation, and even death.

At least 44 homes and other structures have been destroyed as a result of Kilauea, and 2,000 people have been ordered out of their homes. A man was also seriously injured on Saturday, after a plate-sized chunk of molten rock shot out of a fissure and struck him on the leg.