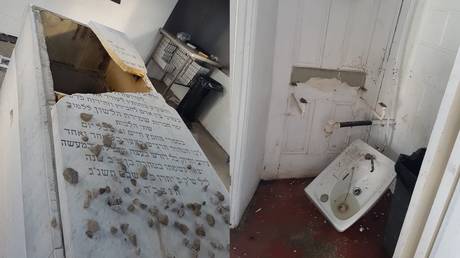 Vandals have targeted a Jewish cemetery in Manchester, England, smashing a rabbi’s grave and causing tens of thousands of pounds worth of damage in what police have described as an “abhorrent act of hate.”

The grave of a prominent rabbi was opened and dozens of headstones were damaged at the Phillips Park Jewish cemetery in Whitefield. Three of the chapels were damaged, with two stained-glass windows smashed and a number of sinks pulled from the walls during the incident, believed to have taken place sometime between Friday afternoon and early Saturday.

Today, the Jewish cemetery in Whitefield, Manchester was vandalised and graves were smashed. These cowards picking on the dead trashed the place. This is a horrible act of antisemitsm. pic.twitter.com/144tAIQIHZ

The cleanup has commenced on the graveyard. Workers are currently on site repairing the damage. A temporary cover has been placed on the Rabbis tombstone. pic.twitter.com/ty7ABBEtmW

The cemetery’s CCTV system was also stolen in what Greater Manchester Police said was a “clear attempt to cover their tracks.”

Greater Manchester Police Assistant Chief Constable Mabs Hussain described the cemetery attack as “an abhorrent act of hate,” adding that “all efforts will be made to arrest those responsible.”

This is an abhorrent act of hate which took place in the Jewish cemetery in Whitefield, Bury yesterday.
Officers are supporting the local community with @CST_UK & all efforts will be made to arrest those responsible.
Someone will know who did this pls contact 101 with any info. pic.twitter.com/Hb8qPlOiJL

The damage is estimated to cost £30,000 to repair, according to a crowdfunding page which has already raised £10,00 to help address the extensive vandalism.

“I want to send a clear message that incidents of this nature will never be tolerated in our communities,” Superintendent Paul Walker said, adding: “I would encourage anyone with any information to get in touch as soon as possible.”