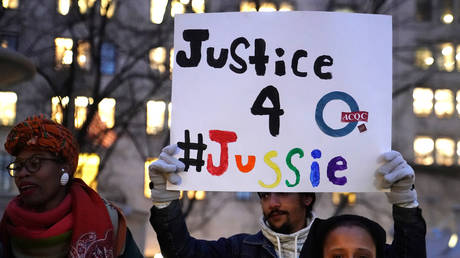 The racist, homophobic assault on ‘Empire’ actor Jussie Smollett earlier this month was a hoax, according to multiple reports suggesting the actor staged the attack because his character was being written off the show.

Two “persons of interest” – including another actor from the TV drama – have reportedly confessed to staging the hate crime against Smollett in order to convince showrunners to keep him on. The attack – in which the perpetrators allegedly yelled “This is MAGA country!” while placing a rope around the actor’s neck – shocked and horrified a nation that thought it had moved beyond such behavior.

Chicago police reportedly tracked down the suspects, a pair of brothers from Nigeria who returned to their home country the night after the attack. Officers were waiting at O’Hare Airport to apprehend them on their return and seized a variety of items in a search of their apartment, including a red hat, bleach, electronics, and sneakers.

BREAKING:Police raided the home of two persons of interest in Jussie Smollett case last night. Both men are of Nigerian decent and have appeared as extras on the show. Police took bleach, shoes electronics and more.Officers asked family if they knew #Jussiesmollett. @cbschicagopic.twitter.com/PDSFtf5jwb

After hours of questioning, they apparently spilled the beans, and reports from local CBS and ABC stations framed the entire event as a hoax that was staged because Smollett’s character was being written off the series.

BREAKING: Multiple soucres tell @ABC7Chicago Eyewitness News Jussie Smollet and the 2 men who are being questioned by police staged the attack – allegedly because his character was being written out of the show Empire.

While a police spokesman says the ABC7 report is “unconfirmed by case detectives,” details are gradually leaking out, and for many critical watchers the story never really added up.

Media reports anout the Empire incident being a hoax are unconfirmed by case detectives. Supt Eddie Johnson has contacted @ABC7Chicago to state on the record that we have no evidence to support their reporting and their supposed CPD sources are uninformed and inaccurate. pic.twitter.com/iSO5YFv452

Smollett had been less than cooperative with authorities, failing to show up for interviews and dragging his feet in turning over phone records, which some found strange for a supposed victim of a modern-day lynching. The attack was not caught on camera in a city with more surveillance cameras per square mile than anywhere else in the country. Still, politicians and pundits used the attack to grandstand, and everyone prayed the miscreants who’d targeted the actor would be found quickly.

Smollett initially told authorities he was jumped while walking home from a fast-food restaurant around 2am on January 29, claiming the attackers beat him up, poured bleach on him, shouted racist and homophobic slurs, and placed a rope around his neck. When police questioned him about a TMZ report published the following day, which claimed his attackers had yelled “This is MAGA country!” (referring to the Trump slogan “Make American Great Again“), he claimed he’d forgotten to include that detail in his initial narrative.

Earlier on Thursday, Smollett told Good Morning America he was “pissed off” that people didn’t believe his story of the attack.

Twitter was full of speculation on what was next for Smollett.

I wonder who is going to write the first “it doesn’t matter the attack was fake, it COULD happen in a Trump world, and that’s all that matters” story.

Or, he has now entered rehab to deal with “issues”

Due to the racism and homophobia of America, he’s been attacked every day of his life. Whatever the particulars about this isolated incident, the damage he has suffered is the same regardless and we must respect HIS “truth”, which is for him alone to determine. *drinks*

Lmfaooo he about to be written into jail

Also on rt.com
UK woman says she was held by police for 7 hours after ‘misgendering’ trans activist on Twitter