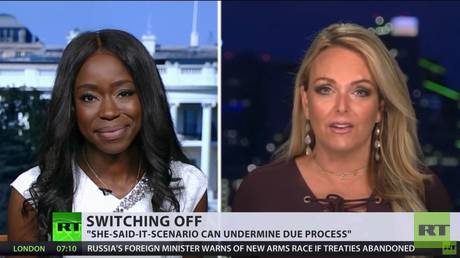 RT’s debate explores whether #MeToo has encouraged women to speak up or has created a platform for false allegations, in light of a new poll that shows men are now less concerned about harassment than before the movement began.

The number of male respondents who believe workplace harassment to be a serious issue has dropped 13% since the start of the #MeToo movement in 2017, a new Gallup poll shows. Men were also more likely to believe people are too sensitive about the issue. What has changed?

“Men are getting caught, and they want to go back to how things used to be” says women’s rights advocate Reese Everson. She believes that the “old boys club” is angry that they are no longer able to harass with impunity since the #MeToo movement began to raise awareness of the issue.

Also on rt.com
‘I’m trans. I’m an immigrant. I’m gay’: Alyssa Milano identifies as everything at once, gets roasted


In particular, she thinks the drop in their concern about harassment is predominant among “republican men” who are “on the defensive” in the wake of allegations against Brett Kavanaugh and are worried something similar might happen to them.

Gina Loudon, on the other hand, takes exception to “castigating men” as a unified “violent group” while painting women as their victims. She argues that the #MeToo movement’s push to “believe women,” even without concrete evidence, has resulted in a justifiable fear over the erosion of due process.

“Accusations that have zero evidence can actually be used against someone later in their career,” she argued. While some men are indeed guilty, she continued, “some women have made false allegations.”