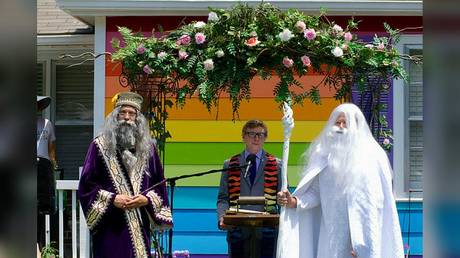 JK Rowling has revealed that her Harry Potter books have just what every parent wants their kids reading about: a “passionate sexual relationship” between adult men. Some fans are now skeptical of the author’s odd additions.

In an interview on the DVD of Potter-universe film ‘Fantastic Beasts: The Crimes of Grindelwald,’ Rowling confirmed that Dumbledore, a wizard who wears a long flowing gown and bedazzled hat and brandishing a magic wand, was in an “incredibly intense,” “sexual” “love relationship” with titular-character Grindelwald.

While Rowling’s politically correct marketing strategy might hit home with some readers, others believe the self-described “bourgeois neoliberal centrist” author is pandering and insincere with what’s seen as her retrospective canonization of contemporary identity issues. Watch fans’ reactions to Rowling’s decision to bring PC politics into life at Hogwarts.