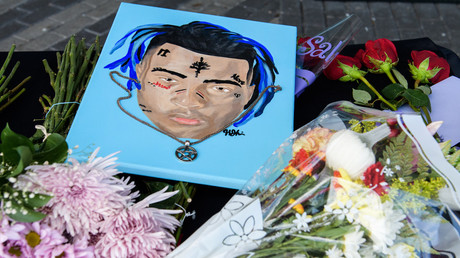 Disturbing surveillance footage of the fatal shooting of US rapper XXXTentacion has been shown in court during a bail hearing for one of the murder suspects.

The CCTV video was presented by prosecutors at a Broward County court hearing, Thursday, where the case was being made for bail for Robert Allen, one of four suspects charged over the June murder of the rapper.

The footage shows one man (allegedly Allen) walk past XXXTentacion in a motorcycle dealership in Deerfield Beach, north of Miami, before returning to his SUV. The man stays in the getaway vehicle while two others (allegedly Allen’s co-defendants Michael Boatwright and Trayvon Newsome) get out of the car, carrying guns, and approach the rapper’s vehicle.

A struggle can be seen before one of the men goes to the passenger’s side and grabs a Louis Vuitton bag while the other, identified by authorities as Boatwright, opens fire at point blank range.The men escaped with $50,000 in cash.

Allen’s attorney argued that a bond should be set because his client never got out of the car and didn’t pull the trigger. However, Judge Michael Usan denied the request and ruled that Allen should remain in jail.

Boatwright, Newsome and a fourth suspect, Dedrick Williams, have also been indicted on first degree murder and are being held without bond.