Golding, 36, and Fransen, 32, both of Penge, south-east London, stood trial in January at Folkestone Magistrates’ Court. They were charged with three and four counts respectively of hate crime.

Golding and Fransen were arrested over the distribution of leaflets and videos which were posted online during the trial of three Muslim men and a teen, all of whom were later convicted of rape and jailed. 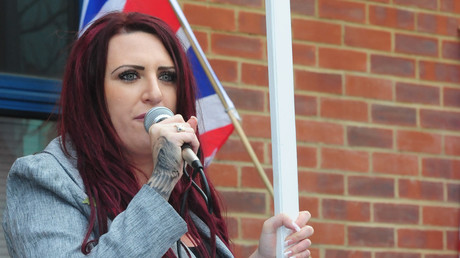 The court heard how last year Fransen went to the home of one of the defendants, Tamin Rahmani, and shouted abuse through the front door. His partner, Best, said she was alone with their two children – aged 18 months and three years – when the incident happened.

The mother-of-two told the court that she blames Fransen for her daughter’s stillbirth. “She was making racist remarks: ‘Dirty Muslim rapist, come out, we’re not going to leave until you’re gone, come out. Dirty scumbags,’” Best said.

“It was directed at Tamin because she thought he was in there but he wasn’t… I was also pregnant at the time it happened, two days after I started to bleed heavily and lost my daughter; she was stillborn. I blame Jayda Fransen because there was no other reason for it to happen.”

“I have no doubt it was their joint intention to use the facts of the case (in Canterbury) for their own political ends,” the judge said. “It was a campaign to draw attention to the race, religion and immigrant background of the defendants.”