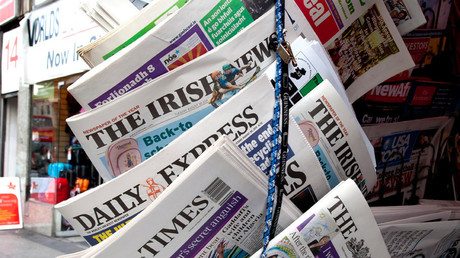 Guardian columnist Owen Jones has fired an opinion-rocket right into the midst of his own kind – journalists. His claim that the mainstream media is an invite-only club run by public school pals has not gone down well.

It began when the author and columnist tweeted some of the lessons he’s learned working in the British media. Labeling the profession a “cult” in the UK, Jones goes on to say the mainstream media (MSM) is “afflicted by a suffocating groupthink, intolerant of critics, hounds internal dissenters, full of people who made it because of connections and/or personal background rather than merit.”

Hurling such accusations against the British media did not solicit a positive reaction from the club’s members. Jones himself described the onslaught that followed against him as an “inferno” of fury… which in turn, sparked an article detailing exactly what is wrong with the UK press.

Journalists from publications across London (where most mainstream outlets are based) were outraged by the comments. There were anecdotes given to disprove Jones – with one reporter even quipping that “no one tells me what to think.”

@owenjones84 i went to state school and was first person in my family to ever go to university. I had never met a journalist till i left uni. No one tells me what to think
PS have you noticed we are all women??

Jones goes on to describe what’s known as the ‘huddle’ – to put it simply, that’s when reporters get together after Prime Minister’s Questions (or other media events frequented by lobby journalists) to decide what to say or write about. “[L]obby journalists will often stand together and/or walk back to the press lobby together and agree on ‘what just happened,’ if you like,” Jones writes.

Other ways the huddle – or “groupthink,” as he calls it – manifests in the media is through peer pressure. Jones included a comment from right-wing blogger Paul Staines in explanation: “there is for example peer pressure on new hacks to not rock the boat,” even if that pressure is applied by an “exasperated collective groan [from other reporters] if someone asks a dissonant question.”

Mikey: I’m aware of what the huddle is. I’ve interviewed 3 lobby journalists, 2 former, one current, who explained to me that during these huddles, the journalists will discuss the “best line” and interpretation of what they saw. The NS mentions it here:https://t.co/GKvs0nXjlopic.twitter.com/mECKxYOrP8

Staines’ comments end by adding that it is “not a conspiracy, just peer pressure.”
Times columnist David Aaronovitch‏, ex-BuzzFeed writer James Ball, Financial Times editorial director Robert Shrimsley‏, and freelance journalist Robin Whitlock were some of many to swipe back at Jones. ITV news royal editor Chris Ship simply tweeted back his educational history, as the virtue signaling and defensiveness told their own story.

Comprehensive school. No family connections in media. No help. No nepotism. But a lot of hard work @OwenJones84

PoliticsHome editor Kevin Schofield followed suit. “I grew up in a working class household, went to state schools, worked my arse off on local papers for years and finally made it to Fleet St,” he tweeted, nose thoroughly out of joint.

It turns out Jones was referring to the media elite of the national titles and broadcasters; and not the “army of poorly paid and insecure freelancers or local reporters who are deeply undervalued,” as he describes them.

To go with the truth bomb he lobbed into the center of the media scrum, Jones dug up one or two supporting statistics – and it turns out that many in the media had a very privileged start to life.

“According to another government study, journalists are second only to doctors when it comes to the dominance of those from professional or managerial parental backgrounds. In other words: journalism is one of the most socially exclusive professions in Britain.”

That hasn’t stopped journalists and writers from coming out of the woodwork to slam Jones – or, at least, to enjoy others doing so.