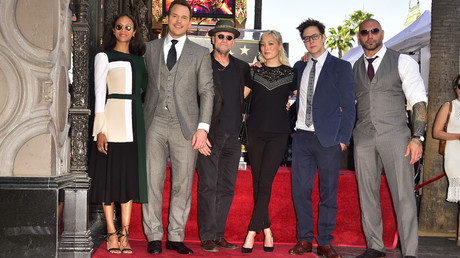 The cast of Guardians of the Galaxy have published a letter in support of director James Gunn, who was fired by Disney earlier this month after a series of old tweets about rape and pedophilia reemerged, prompting public outrage.

Gunn’s past tweets, thousands of which have since been deleted, were highlighted on Twitter by conservative commentators Mike Cernovich and Jack Posobiec, resulting in an apology from Gunn for the “outrageous and taboo” jokes that he made earlier in his career. Disney chairman Alan Horn called Gunn’s tweets “indefensible” and said they did not live up to the film studio’s standards.

But now the cast of the blockbuster movies is coming out in support of their fired director in an open letter published on social media. The cast, which includes Chris Pratt, Bradley Cooper, Vin Diesel and Zoe Saldana, wrote that they look forward to working with Gunn again and that his story “isn’t over” yet.

READ MORE: Guardians of the Galaxy defeated by the most fearsome super-villain of all…political correctness

The actors said that Gunn was a “good person” who was “put on trial”. They blamed the “growing political divide” in the US for the “character assassinations” and called on people to “stop weaponizing mob mentality”.

But not all movie fans appear to be as forgiving as Gunn’s Hollywood colleagues — and some didn’t see the funny side of pedophilia and rape jokes.

Sorry, but making a joke about having kiddies touch you is not normal. It cannot he explained away. A “good man” wouldn’t think “well, that could be a funny topic” of pedophilia.

Can’t agree with you on this one. People keep saying, “it was from years ago.” He was 41 years old at the time. 41! Not some young man who’s immaturity got the better of him. He KNEW the severity of his tweets. What if he was saying that about your child? Still feel the same?

The guardians cast are pussies for not calling out their friend who made 10k pedophilia jokes. If you’re friend does something that disgusting you don’t excuse it, you call them out on it and you fucking drop their ass. It’s what I’d do and it’s what most of my mutuals would do.

Did the guardians cast even read the tweets, they were fucking disgusting and made most of us feel very uncomfortable, I’m really done.

It’s not all bad news for Gunn, though. More than 350,000 people have signed an online petition in an effort to have him rehired and some fans also spoke out on Twitter to support him.

The Guardians Of The Galaxy cast knows James Gunn. None of you all do. Clearly he’s a good guy if they are risking their careers to support him. They aren’t defending the jokes. But everybody messes up. Everyone does some pretty bad things.

Fair play to the Guardians cast for doing that, for standing up for their friend, and for doing what they feel is right.

I’m glad @DaveBautista and the Guardians cast are speaking out. We HAVE to change the trend of bots and trolls hidden behind anonymous usernames being the judge and jury over people’s entire careers! It’s so good to see you guys doing the right thing #RehireJamesGunn#WeAreGroot