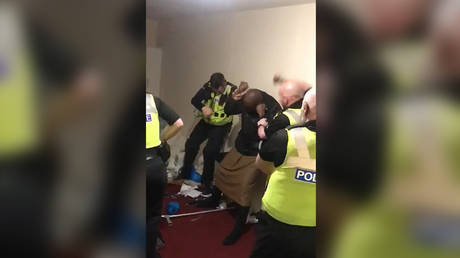 Footage apparently showing unidentified officers repeatedly and viciously beating an unarmed man over the head has gone viral online sparking an investigation amid contradictory claims of both police brutality and fake news.

The eight-second video clip shows a group of uniformed officers surrounding a black man and raining blows on his head while he struggles to fend them off. A crutch is seen on the floor beside the man.

The clip has been viewed over 2.8 million times and shared tens of thousands of times in less than 24 hours since it was published on Twitter.

One officer beats the man on the back of the head using a pepper spray can which goes off repeatedly in the process, forcing one of his fellow officers to recoil and cover his face.

Another officer closes the door, ending the clip, which several Twitter users have claimed is conspicuously edited and may not show the full context of the incident.

Where’s the whole clip? Editing at its best there.

It is unclear where exactly in the UK the footage was filmed and what the circumstances behind the incident were, however its appearance online has triggered an internal investigation by the West Midlands Police.

“The video footage, together with the footage from body cameras worn by the officers is currently being reviewed,” the force stated. The investigation will determine whether the incident “needs to be referred to the Independent Office for Police Conduct.”

When the footage originally emerged there were concerns over whether the footage was staged, as both the Metropolitan and Humberside Police forces reportedly failed to match the black tops, hi-vis jackets and stab vests worn by the supposed officers in the clip to any police force in the UK.


The apparent absence of official insignia also casts further doubt on the inflammatory footage, which has sparked fury online amid claims of police brutality and Islamophobia.

When I worked in forensic mental health I’ve personally restrained men of this fellas size in a safe and (as well as possible) dignified way, with 3 other staff, no safety vests, handcuff, or weapons of any kind. This is completely pointless, assault.

Watch it full screen, he’s hitting the guy with a pepper spray can, and the other cops are ducking out the way because it’s spraying

The biggest problem here is ‘shutting the door’. They knew they had already gone too far, didn’t want it recorded. Their job, despite provocation, being hit etc, is to respond with control. That’s what they’re trained to do. We need our police to be in control. Not thugs!

While six Humberside police officers were suspended last Thursday, it was unrelated to the violent incident in the footage.

Shariff Athman, 25, the alleged uploader of the footage, claims the man had “apparently resisted arrest,” according to the Daily Mail.

“These days you can catch everything on camera so I turned it on. I was quite shocked at what I saw,” Athman told the Daily Mail.

“Obviously there is more to it and he was apparently resisting arrest but from what I saw – I was really shocked… Who knows what happened when the door was closed.”