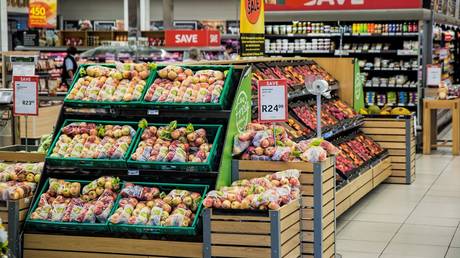 The Market Basket supermarket chain in New England, US has been forced to issue an official statement after multiple shoppers reported seeing a ghost at one of its stores in a story which gained national media attention.

In a closed Facebook group, residents reported multiple sightings of a ghost wearing Victorian-era clothing, specifically a nightgown, floating through the aisles.

The apparition has been described as short, youngish (or ghoulish) between the ages of 17 and 30 with long, dark hair, light skin and blue eyes, dressed in Victorian-era garb.

“This is going to sound really really strange,” one concerned shopper wrote in a closed Facebook group for residents to share information about local events and issues. “But has anyone seen a ghost in the Wilmington Market Basket?”

Also on rt.com
Did he or didn’t he? CCTV footage released of security guard’s ‘ghostly’ encounter (VIDEOS, POLL)


“I’ve seen something like this but… younger,” one person wrote. “[Definitely] around that era tho [sic], the clothes and hair style.”

One employee who has worked multiple overnight shifts believes the store is “definitely haunted” but also conceded “it’s probably just your imagination taking you to crazy places after working alone for 10 hours straight.”

“As far as we know all of our stores are ghost-free,” Justine Griffin, a spokesperson for The Market Basket said in a statement to the Globe. “But if there’s anything to it, she’s probably attracted to our Victorian-era prices.”

The whole episode has attracted nationalmedia attention in the US and even drew comments from Congressman Seth Moulton’s office.