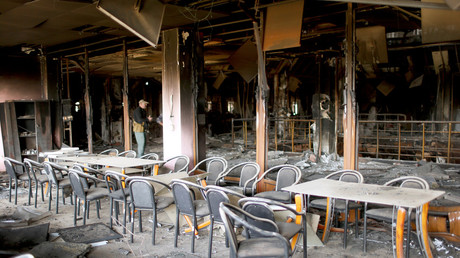 A Texas man hoping to score a job with the Islamic State (IS, formerly ISIS) sent the terrorist group a resume outlining why he’d be the best man for the job, according to a report by George Washington University.

“I am looking to get a position teaching English to students in the Islamic State,” the jobseeker wrote in a letter to the ‘Director’ of a university in Mosul, northern Iraq. Warren Clark, who graduated from the University of Houston, referred to himself by his jihadi name, Abu Muhammad al-Ameriki, in his letter.

Clark went on to outline his experience teaching English, which includes a stint in Saudi Arabia. “I consider working at the University of Mosul to be a great way of continuing my career,” he said. Mosul was an IS stronghold until it fell to coalition forces in July 2017.

“I am looking to get a position teaching English to students in The Islamic State,” he wrote.

The unusual job application was revealed in the George Washington study, ‘The Travelers: American Jihadists in Syria and Iraq,’ which examined Americans who traveled to join jihadist groups in the Middle East.

The application was apparently found in a house in Mosul. “We had a source in Iraq whose neighborhood was taken over by ISIS fighters and when it was taken back by Iraqi forces, there were documents left behind and that’s how we received the cover letter and resume,” Seamus Hughes of the university’s Program on Extremism told NBC.

Clark is thought to have joined IS and is believed to be still alive. At least 64 Americans have joined the terrorist group in Iraq and Syria. The report states at least 50 others were stopped by law enforcement before they could leave the US.