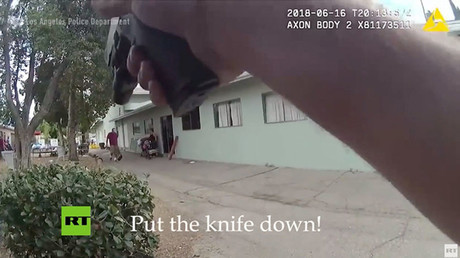 The Los Angeles Police Department (LAPD) has released a video that shows officers killing a hostage as they attempt to neutralize her knife-wielding captor.

Footage from body cameras worn by LAPD officers involved in the incident shows them approaching Guillermo Perez, 32, a known gang member who had just been released from prison for a domestic abuse sentence. Police were responding to a call that he had just stabbed his ex-girlfriend in the Van Nuys neighborhood of Los Angeles, California. The date is June 16.

The officers repeatedly demand Perez drop his knife, and fire non-lethal beanbag rounds at the gangbanger, who shields his body with a steel chair.

Perez then corners Elizabeth Tollison, a 49-year-old homeless woman standing by on the sidewalk, and holds his knife to her throat. Officers open fire on Perez, discharging 18 shots and killing Tollison by accident.

In a press conference on Tuesday, LAPD Chief Michael Moore said that his department will implement new training, and equip officers with a 40-millimeter launcher that fires foam rounds and has a greater chance of stopping suspects than the beanbag gun.

Moore said that LAPD officers have always been trained to kill a hostage taker with a “precise head shot,” and blamed poor organization among officers at the scene for Tollison’s death.

“Tragically, this was another case where officers were forced to make split-second decisions based on the actions of a violent individual,” Moore said. “This was a tense situation that unfolded very quickly, and it’s every officer’s worst nightmare.”

A month after the Van Nuys shooting, a store manager was fatally shot by an LAPD officer exchanging gunfire with a suspect inside a grocery store. Before the two shootings, the department had gone 13 years without killing a hostage or bystander.