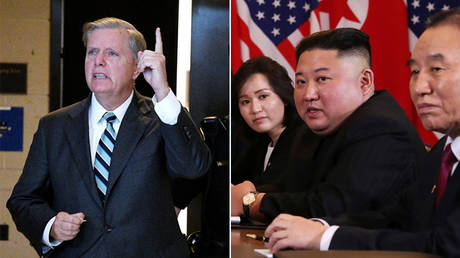 While the South Carolina Republican applauded Trump for walking away from the negotiating table rather than agreeing to anything less than “complete denuclearization” from the DPRK, Graham didn’t seem to grasp the concept of incremental progress, or improved diplomatic relations, resorting to threats and dusting off Trump’s own puerile name-calling from over a year ago.

Also on rt.com
Kim willing to denuclearize, allow US liaison in Pyongyang as 2nd day of Hanoi summit begins


“We must not go back to the status quo,” Graham warned, even getting in a jibe at “Rocket Man” – though Kim has not conducted a missile test since 2017 and reportedly told Trump he has no plans to do so.

“If negotiations fail, it would be time to end the nuclear threat from North Korea – one way or the other,” Graham said ominously. Both Kim and Trump, meanwhile, left the summit looking full of optimism that a deal would be struck in the future.

Graham has historically been among the most trigger-happy of his trigger-happy party, eclipsed perhaps only by his friend the late Sen. John McCain, who never met a country a good bombing wouldn’t fix. Graham famously predicted in 2017 that there was a 30-percent chance Trump would preemptively nuke North Korea to prevent Kim from developing a weapon capable of hitting the US, and he has been among the most strident voices excoriating the president whenever Trump hints at pulling troops out of Syria, Afghanistan, or any of the other endless conflicts in which the US military is involved around the globe.