Donald Trump is a puppet. No, not on the Kremlin payroll. He’s been immortalized in all his rubbery glory by the artist behind ‘Spitting Image,’ the hit British comedy show gunning for a momentous return, this time on US television.

The American spin-off of the British show will return for US audiences, although parts will be filmed in the UK, co-creator Roger Law has revealed. US network NBC approached the artist, Law said, and production company Avalon has begun talks about the show’s reboot. 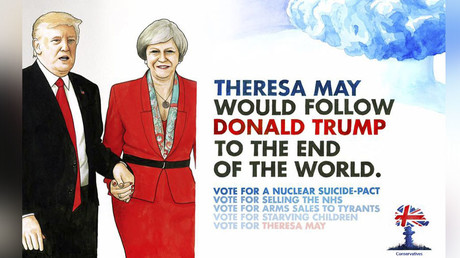 President Trump, Law said, is a major inspiration for firing up the show once again.

“Quite what you do I’m not sure because he satirizes his f****** self… They seem to be quite serious, we’ve had a puppet made,” he said.

“I am a reformed old gentleman but I get very angry about things. It’s puppets, not people, so you can get away with murder. You could have a pussy-grabbing sketch for Christ’s sake.”

Those behind the show are hoping Trump may become a fan and Tweet about it. Law said: “That’ll get a few more viewers… He spends six hours a day watching television so of course he’ll watch it.”

The presidential puppet has already been created and will go on display at Norwich’s Sainsbury Centre for Visual Arts as part of a retrospective of the artist’s work.

Spitting Image ran for 13 years in the 1980s and 90s. Law and Peter Fluck created the parody-packed show mocking figures such as Margaret Thatcher and Arthur Scargill.

The Norwich exhibition ‘Roger Law: From Satire to Ceramics’ will include puppets, ceramics and other work by Law. The artist said having the exhibit is like having “all these images you’ve done in the past come back to haunt you.”

It will run from November 18 until April 3, 2018, at the Sainsbury Centre for Visual Arts in the University of East Anglia, Norwich.