A trade association whose members include internet giants Google, Twitter and Facebook has expressed its support for a bill that would reverse the repeal of the Federal Communications Commission’s (FCC) net neutrality rules. 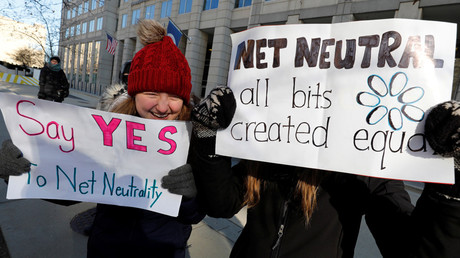 The Internet Association is a trade group which represents large global internet companies including Microsoft, eBay, Netflix and Uber and advises them on public policy issues.

The FCC’s recent Restoring Internet Freedom Order “leaves consumers with no meaningful protections to ensure their access to the entire internet,” Beckerman claims.

“Strong net neutrality rules are necessitated by, among other factors, the lack of competition in the broadband service market,” the letter states.

READ MORE: How the FCC’s reversal of net neutrality may affect you

Democrats in the Senate are seeking a vote on the net neutrality decision. A bill proposed by Democratic Senator Ed Markey that would overturn the FCC’s repeal has amassed nearly enough support to pass the chamber with all Democrats and one Republican declaring their support. One more GOP senator is needed to pass bill.

If made into law, it would effectively reinstate the regulations adopted under former President Barack Obama. However the bill also needs a majority in the House where Republicans currently hold more seats.