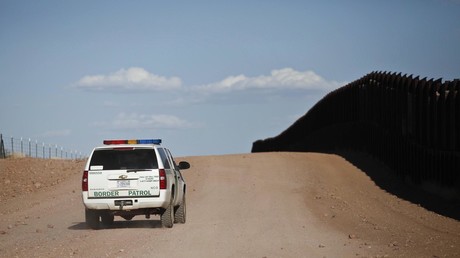 A hot pursuit by US Border Control and a Texas county sheriff has resulted in five deaths, after an SUV carrying illegal migrants flipped over, sending passengers up in the air and flying out of the vehicle.

Just before noon, about 50 miles from the Mexico border, US Border Patrol initiated a pursuit of a Chevrolet Suburban suspected of being in a “smuggling event” near Carrizo Springs, Texas. Dimmit County Sheriff office took up the chase, trying to halt the car, which was going over 100mph. Refusing to bow to police commands, the driver of the black SUV, carrying undocumented immigrants, continued to press the pedal to the metal, until the vehicle flipped off a highway in Big Wells, about 130 miles southwest of San Antonio.

“The vehicle ran off the road and caught gravel and then tried to re-correct and then caused the vehicle to turn over several times,” Sheriff Marion Boyd told reporters. Images from the scene showed the SUV badly wrecked in the middle of the road.

Out of 14 people in the car, four were killed on the spot while a fifth person died at the hospital in San Antonio, the Dimmit County Sheriff said. Another nine, including the driver, who is believed to be a United States citizen, were taken to nearby hospitals. The names and nationalities of the victims have not been released.

In addition to the driver, one of the passengers, who is also believed to be American, was placed in custody. They are likely to face state and federal charges, Boyd said.

Despite the tragic outcome of the incident, the Sherriff commended what he called the “good police work” by the Border Agents who initiated the chase. At the same time, Boyd emphasized that the officers did nothing wrong and that high-speed chases around the state of Texas are a common occurrence.

“We’ve seen this many, many times, in not only this county but other counties along the border,” Boyd said. “It’s a problem. … This is, I think, a perfect example of why our borders need to be secure.”

To reinforce the border, the Sherriff suggested installing high-tech security features in addition to the wall that President Donald Trump has vowed to build. “If [the border wall with Mexico] can be built, then I think it should be built, but along with that, I think there needs to be cameras,” Boyd said. “There needs to be censors, there needs to be other things integrated to be able to protect our borders.”

Meanwhile, the US Customs and Border Patrol Agency issued a statement expressing “deepest sympathies” to the families of those who died in the crash. The Agency added that the incident is now being investigated by Homeland Security Investigations, the US Border Patrol, Texas Department of Public Safety, Dimmit County Sheriff’s Office, and Customs and Border Protection’s Office of Professional Responsibility.