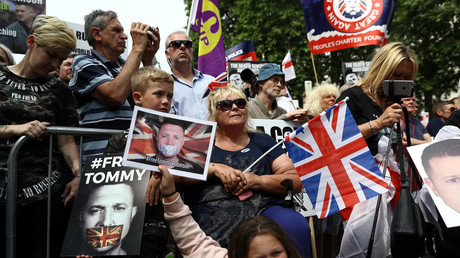 Supporters of Tommy Robinson have gathered in London to show their support for the activist.

Robinson, who founded the English Defence League, was jailed in May after he pled guilty to contempt of court. He was on a suspended sentence for another contempt of court incident at the time.

Robinson, whose real name is Stephen Yaxley-Lennon, made comments about an ongoing grooming trial in a Facebook Live broadcast outside Leeds Crown Court in earshot of the trial’s jurors. He was found in contempt of court for breaching court reporting laws and threatening the trial. He was sentenced to 10 months for that charge and three months for breaching his suspended sentence.

Robinson’s supporters demand his release from jail, as they believe he was arrested because of the information he was exposing about “Muslim grooming gangs.”

“So, Downing Street is just around the corner, so maybe once again, as loud as possible as we can, let them hear our message: Free Tommy Robinson!” he said.

Another march planned for Newcastle was cancelled after police said their resources were stretched due to an Ed Sheeran concert.