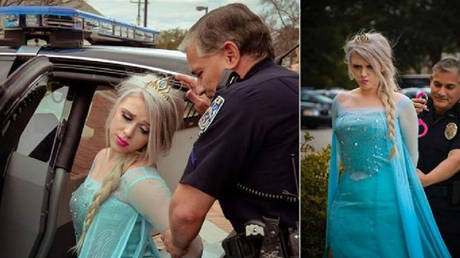 Police departments across America are pulling out all the stops to stamp out crime as the polar vortex grips the country. The cold hearted clamp down has even led to the arrest of Elsa, the beloved Queen from Disney’s Frozen.

The McLean police department in Illinois announced the high profile arrest on Facebook on Tuesday.

“Due to the EXTREME COLD weather, all criminal activity and acts of stupidity and foolishness has been cancelled,” it wrote. “Even Elsa has been placed under arrest with NO BOND until further notice.”

Also on rt.com
Snowstorm threatens to take over Atlanta ahead of Super Bowl


The department shared snaps of the Queen of Arendelle being led away in fluffy, pink handcuffs and officers certainly didn’t look like letting her go.

Elsa’s arrest isn’t the only measure cops are taking in the face of the extreme cold. Noblesville Police Department from Indiana have banned all crime and illegal activity.

“If you do not receive your formal notice you cannot participate in any criminal endeavors,” the department joked.

Police in Kettering, Ohio, made a similar joke, adding that while it may be freezing outside it’s a balmy 72 degrees in its jail so now is the perfect time to turn yourself in for any crimes you have committed.

The Department is also offering free transportation for anyone who wants to take advantage of the offer.

The polar vortex has left parts of the US bracing for record-shattering temperatures. On Wednesday morning Chicago held the dubious honor of being colder than Antarctica.

The National Weather Service said that temperatures could hit -40F (-40C) in parts of the Northern Plains and Great Lakes.