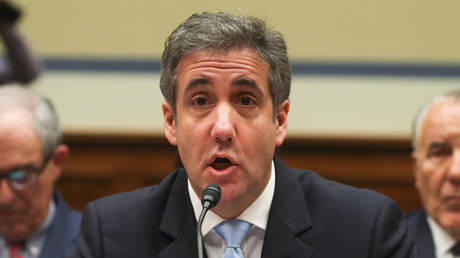 Former Trump attorney Michael Cohen revealed no fresh accusations of ‘Russian collusion’ in his testimony to Congress, but did the one-time fixer give Trump’s opponents anything new? RT’s Rick Sanchez attempts to find out.

Speaking to the now Democrat-controlled House Oversight Committee on Wednesday, Cohen said he was “sorry” for a two-decade working relationship with Trump, who he branded a “racist,” a “con man” and a “cheat.” Cohen went on to accuse Trump of financial fraud, including swindling charity cash and defrauding the taxman.

“This has nothing to do with ‘Russian collusion,’” Rep. Ro Khanna (D-California) said to Cohen. “This is about old-fashioned financial fraud. Did the president commit a crime?” Cohen was unable to answer Khanna’s question.

Michael Cohen was one of many lawyers who represented me (unfortunately). He had other clients also. He was just disbarred by the State Supreme Court for lying & fraud. He did bad things unrelated to Trump. He is lying in order to reduce his prison time. Using Crooked’s lawyer!

“This whole ‘Russia, Russia, Russia’ thing was just a ruse to go and find a way to tie up this president and ultimately to…impeach,” conservative commentator Ed Martin told Sanchez. “They (Democrats) don’t care about Russia, they care about destroying the presidency….they want a trainwreck.”

Just because collusion talk was largely absent from Wednesday’s hearing, doesn’t mean Trump is off the hook, Democrat strategist Robin Biro chimed in. “Is Cohen a liar, yes. Is he a grifter, yes. He was the fixer, it was his job to do it…there are leads to follow up on.”


Cohen’s testimony implicates Trump in an array of improprieties, like devaluing a golf course and using Trump Foundation money to buy, among other things, portraits of himself. However, Martin argues that these implications are trivial, and prosecuting Trump on them would set a dangerous precedent.

“If we do this now to Trump,” he said, “the next Democrat…everything they ever did is going to be weaponized by Congress to destroy them. The republic hangs in the balance.”

“It’s illegal!” Biro retorted. “Just look at all of Trump’s associates who have already been convicted. In this case the old idiom proves true: you are the company you keep! Michael Cohen is a liar and so is Donald Trump.”