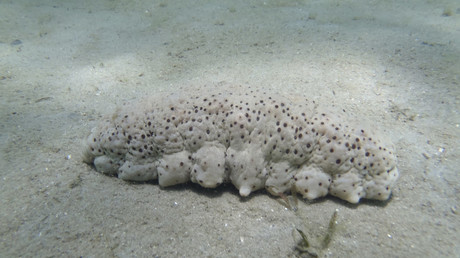 The bizarre feeding habits of a strange bottom-feeding sea creature have been laid bare in amazing footage from the US National Oceanic and Atmospheric Administration (NOAA).

We all know someone who has a tendency to figuratively put their foot in their mouth. Usually it’s a bad thing, but for this little ocean critter, it comes in rather handy.

The sea cucumbers, also known as ‘holothuria,’ are close relatives of sea stars and sea urchins. This footage shows a holothuria of the ‘Enypniastes eximia’ variety using its strange tiny little feet to scoop up ‘feetfuls’ of sediment from the sea floor – more than 2km off the coast of Florida.

Check out this sea cuke using its little “feet” to grab sediment to move it into its mouth to feed. The video is sped up, but it’s safe to say that sea cukes move a little more quickly than their names imply! pic.twitter.com/VKRYlUntD1

Though the video is sped up by five times, this sea cucumber seems to have quite an appetite as the tiny monster traversers the seabed seemingly unable to satisfy its hunger.