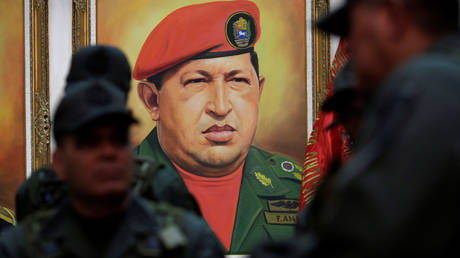 A guest who appeared on right-wing commentator Tomi Lahren’s Fox News show appears to be very confused about Venezuela’s history, chiefly the years of Hugo Chavez’s term, despite it apparently directly affecting her own family.

Vanessa Rivera, a member of the ‘Network of Enlightened Women’, was part of a three-person panel of “conservative” contributors on the show to share their “inspirational stories of trials and triumphs on America’s college campuses.”

Part of Rivera’s rags-to-riches story appeared to begin with her mother fleeing a “socialist-ruined Venezuela”. However, she proceeded to either confuse her family’s timeline, expose her lack of knowledge about the country’s history – or both.

“My mother left Venezuela in the 80s because under Hugo Chavez the “president” not dictator of the country, socialism was rampant and it was running the country,” said Rivera in a questionable summary of Venezuelan history.

Chavez actually didn’t become president of Venezuela until 1999, staying in power until his death in 2013. The gaffe was picked up on by several viewers who took to Twitter to point out the mistake.

Can you tell @CandidNessa that Chavez didn’t take power till 1990. Thanks.

“Enlightened Woman” has a lapsus while denouncing “rampant neoliberalism” in the 80s when the Venezuelan neoliberal dictatorship destroyed the economy and in 1989 killed 3000+ people demanding food and work in Caracas (known as the “Caracazo”). #Venezuelahttps://t.co/QqBxx6ohs2

Never let bothersome things like historical facts get in the way of a narrative.

Who can forget the famous socialism of… *checks notes*… the leadership that Chavez tried to orchestrate a coup against?