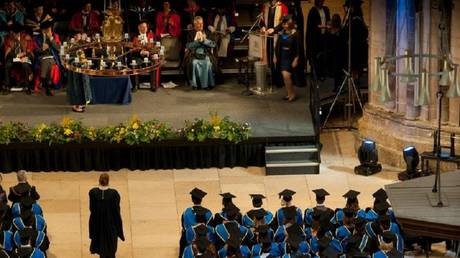 A university lecturer who quit his post after being accused of Islamophobia and sexism has hit out at students who have “smug little minds,” claiming they would have been loved by the repressive East German secret ‘Stasi’ police.

Michael Blackburn, who taught creative writing and English Literature at the University of Lincoln, has written a scathing piece on his blog in which he denounces “wannabe leftist politicos” and “social-justice types” for behaving like a “mob,” who seek to drive out dissenting views – like his.

They are now the witch hunters, but instead of condemning you, as the victim, to imprisonment, torture or death, you’re banished to the soft gulag of shame, unemployment and the destruction of your reputation and career.

Blackburn has caused controversy with comments made on social media on issues such as women’s rights and Islamophobia dating back several years, the Independent reports.

In 2012, Blackburn tweeted his relief at not having to read anymore student papers on “patriarchy and the oppression of women” for another year.

In the wake of the London Bridge and Manchester Arena terrorist attacks in August 2017, he declared: “I suspect these terrors [sic] attacks were carried out by Muslims because of Islam.”

Academics, by and large, are actually open to new ways of thinking and mark a constructed argument, NOT what they agree with, which was Dr Blackburn’s mistake at Lincoln. Here are some of his views. I’ll link articles in the next for those unable to see. pic.twitter.com/YwCZ7OY2M6

Blackburn’s remarks echo a growing concern that universities are curbing freedom of speech through the “no-platforming” of controversial speakers – speakers such as Milo Yiannopoulos, who has been accused of holding misogynistic and racist views, as well as Donald Trump’s former chief strategist, Steve Bannon.