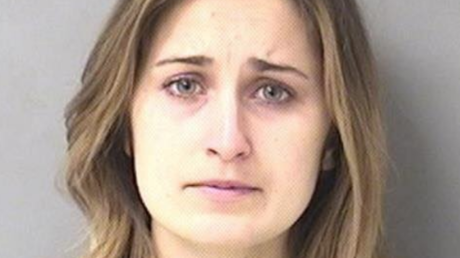 One might expect that a beauty queen and teacher would be a great source for positive messages. However, a former Miss Kentucky has reportedly been caught sending out something else – nude photos to a 15-year-old boy.

Ramsey Bearse, a 28-year-old school teacher, traded her tiara for handcuffs on Friday after being arrested and charged with four felony counts of distributing or displaying obscene matter to a minor.

The former pageant queen, who lives in West Virginia and teaches eighth-grade science at Andrew Jackson Middle School in the town of Cross Lanes, is accused of sending the teen at least four topless photos via Snapchat between August and October, according to the criminal complaint cited by WSAZ 3.

The teacher was reportedly busted after the 15-year-old’s parents spotted the images on their son’s phone. The teen was one of Bearse’s former students.

Investigators say the teacher admitted to sending the pictures to the boy. She was released on a $10,000 property bond on Friday afternoon and has been suspended from her teaching position.

Authorities say they are so far unaware if Bearse had inappropriate contact with other minors, but are urging others to come forward if that is the case.

Bearse won the title of Miss Kentucky in 2014 and competed in the 2015 Miss America pageant under her maiden name Carpenter.