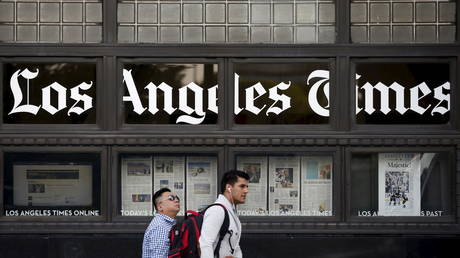 The cyberattack is said to have begun late on Thursday and couldn’t be immediately fixed. It ultimately caused delays in production and delivery of the papers on Saturday, a source familiar with the situation told the Los Angeles Times, one of the publications targeted by the hack.

The attack came from a “foreign entity” aiming to “disable infrastructure, more specifically servers,” rather than steal the data, the paper’s source explained. The details of the hackers’ whereabouts and their exact motive remain unclear.

The culprits managed to shut down key software systems that store news stories, photographs and administrative information. The interference disrupted the printing process, causing the papers to be published late.

The San Diego Union-Tribune is said to have been hit particularly hard, as 85 to 90 percent of its Saturday edition didn’t reach its subscribers.

The local editions of the Wall Street Journal and the New York Times, which are printed at the Los Angeles Times’ printing plant, also saw delays in distribution.

Also on rt.com
Marriott mega-hack: Half a BILLION guests’ data exposed over 4 years


Another Tribune Publishing paper, the Florida-based Sun Sentinel, reported on Saturday that a computer virus had “shut down” its production and crippled its phone lines. When subscribers tried to call the paper, they were erroneously told that the numbers were out of service.

The Department of Homeland Security is aware of the reports of “a potential cyber incident” targeting the press and is working to “better understand the situation,” the department’s spokesperson Katie Waldman said.