Calls for Florida teen Nikolas Cruz to be put in a mental hospital were ignored more than a year before he gunned down 17 former classmates and teachers. The new report adds to the string of official failings before the massacre.

Marjory Stoneman Douglas High School in Parkland and the Broward County sheriff’s office both recommended Cruz should be involuntarily committed for a mental evaluation, while his mother, Lynda, also requested an intervention, according to documents seen by the Associated Press and reported on Sunday.

Such drastic measures could have potentially prevented or made it more difficult for Cruz to buy the AR-15 semi-automatic rifle that he used in his Valentine’s Day rampage through the school that he was expelled from. 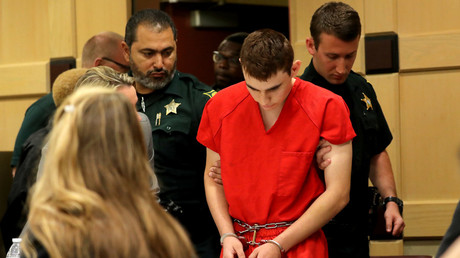 The documents, which will be used as evidence in his upcoming trial, reveal that multiple serious concerns were raised over the troubled youth long before the shooting.

They say he wrote the word “kill” in a notebook, told a classmate he wanted to buy a gun and use it and said he had self-harmed by cutting his arm after he broke up with his girlfriend. He told another student he had drunk gasoline and was vomiting. Calls were made to the FBI about the possibility of Cruz shooting up the school.

The papers were provided by Henderson Behavioral Health, a psychological assessment service that Cruz’s mother contacted for help. They show a high school resource officer from the sheriff’s office and two school counselors recommended in September 2016 that Cruz should be committed under Florida’s Baker Act, which allows for mental health patients to be hospitalized against their will for at least three days. There is no record of such an assessment ever being carried out.

The resource officer in question was former Broward County sheriff’s deputy Scot Peterson, who resigned over his failure to confront Cruz during his half-hour assault on the school. Recently, authorities bowed to a court order and released CCTV footage from the school that showed Peterson standing outside the school while Cruz rampaged inside, which Sheriff Scott Israel said would justify legal proceedings against him.

The latest revelation adds to a long list of shocking oversights by law enforcement and other authorities who were warned of Cruz’ disturbing behavior. Some fellow students, speaking to media on the day of the shooting, said they were not surprised that Cruz was the one who went on a rampage. “He would be the one to shoot up the school,” one classmate told WFOR-TV.

“He always had guns on him,” the unidentified student said. “The crazy stuff that he did was not right for school, and he got kicked out of school multiple times for that kind of stuff.”

Last month, Florida Governor Rick Scott called on FBI director Chris Wray to resign after it emerged the bureau failed to pass on a credible warning of Cruz’s intentions to its Miami field office days before the massacre.

Days later, the sheriff’s office released records of over a decade of calls to Cruz home, 18 of which were an escalating series of violent incidents involving the boy, but none of them were deemed “arrestable.”