Ryanair has announced it will start issuing a Brexit caveat on flight tickets to passengers. It is introducing the measure in case Britain and the EU fail to reach a transition deal by next autumn.

If the UK and Brussels fall short of finalizing a transition deal, the company will from September 2018 issue tickets saying: “This flight is subject to the regulatory environment allowing the flight to take place.” The chief marketing officer of the EU’s biggest budget airline, Kenny Jacobs, told the BBC: “Everyone is saying it’ll be alright on the night once we get closer to April 2019. I don’t think you can take that for granted.” 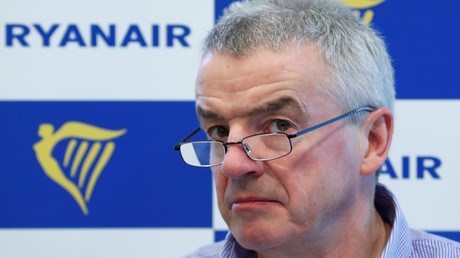 The announcement comes after Ryanair’s chief executive made the headlines this week for saying plans were being considered to ground planes to make Leavers “rethink” the Brexit vote. Addressing a group of airline leaders in Brussels, outspoken CEO Michael O’Leary said he wanted to take “create an opportunity” to make people come to terms with the fact they are “no longer going to have cheap holidays.”

He said: “I think it’s in our interests, not for a long period of time, that the aircraft are grounded. It’s only when you get to that stage where you’re going to persuade the average British voter that you were lied to in the entire Brexit debate.”

The single market for aviation, created in the 1990s, allows for there to be no commercial restrictions for airlines flying within the EU. O’Leary has repeatedly warned that airlines will be forced to cancel post-Brexit services from March 2019 if no agreement in the Brexit negotiations is reached by September, because schedules are planned six months in advance.

Jacobs said some airlines are being “complacent” about Brexit. He said while a deal that would keep planes flying is expected to be worked out, Ryanair is making contingency plans.

The Brexit clause on tickets would be designed to cover the company if there were no agreement over how to manage air traffic after the UK leaves the EU.