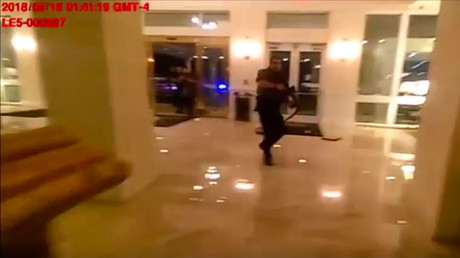 Florida police have released dramatic bodycam footage of their gun battle with a suspect at the Trump National Doral Golf Club Friday.

Officers from the City of Doral and Miami-Dade Police Departments responded to multiple 911 calls of shots fired in the area. As footage from the scene shows, the officers entered the hotel and quickly engaged the suspect in a firefight.

Oddi was shot in the exchange and subsequently disarmed before being taken to Kendall Regional Trauma Center. Once treated, he was transferred to Miami-Dade’s homicide bureau for interrogation after which he was taken to the Turner Guilford Knight Correctional Center, according to a police statement.

Oddi appeared in court Monday and faces five charges of attempted second degree murder on a law enforcement officer, armed criminal mischief, aggravated assault with a firearm, armed burglary with assault and grand theft. He is being held without bond.

One officer sustained a possible wrist fracture in the incident. No hotel employees or patrons were injured in the attack.