Four young children held hostage by a felon were discovered dead following a 21-hour standoff that began after the suspect shot an Orlando police officer in the face.

Gary Lindsey Jr., 35, a convicted felon, was found dead from a self-inflicted gunshot wound along with four children ages 1, 6, 10 and 11 he had held hostage since Sunday night, Orlando police Chief John Mina said at a press conference just before midnight.

The incident began late Sunday night when police responded to a domestic violence call at a west Orlando apartment complex. When they arrived at the scene, the suspect opened fire, shooting officer Kevin Valencia in the face. The officer was rushed to a hospital in a “serious” condition, while the suspect barricaded himself inside with the hostages.

Lindsey continued to exchange gunfire with officers overnight, as law enforcement agencies cordoned off the scene of the ongoing incident. As the SWAT team arrived at the Westbrook Apartment complex on Eaglesmere Drive, authorities proceeded to negotiate a hostage release.

As the stalemate progressed throughout the day, authorities kept “constant contact” with the suspect. The last “indirect” contact was made with the suspect at about 8:30 pm local time on Monday. After losing contact with Lindsey, the SWAT team decided to move in at about 9:00 pm. 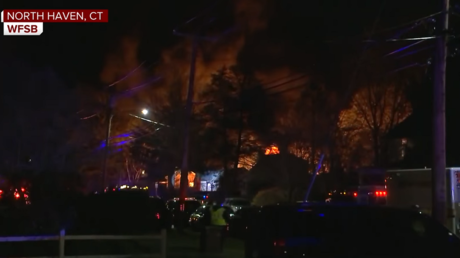 Inside the apartment, the special forces team found all four children and the suspect dead from gunshot wounds. According to Chief Mina, it remains unclear when the four children were killed. Police are continuing their investigation.

“A short time ago, we have made entry into the apartment and found all four children have been killed by the suspect. And it appears the suspect took his own life as well,” Mina told reporters.

While the police have yet to release the identities of the deceased children, Mina earlier told reporters that two children are thought to be Lindsey’s, and two are his girlfriend’s. The name and condition of the girlfriend who initiated the domestic violence call was not released by police.

Lindsey was a felon, according to local media, having previously been arrested for arson and domestic violence battery. Criminal records obtained by WKMG-TV indicate that the 35-year old was arrested four times for violating his probation.