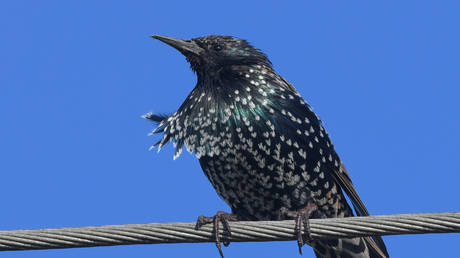 A murmuration of starlings is one of the most captivating and hypnotic sights in nature as hundreds, if not thousands, of birds fly in enthralling formations, captivating and inspiring the earthbound human imagination.

David Young of the Press Association captured an astounding still of a whale-shaped murmuration above Belfast’s Albert Bridge in Northern Ireland on Wednesday evening.

Something a bit fishy about the shape of the spectacular starling murmuration over Belfast’s Albert Bridge this evening. The birds appeared to be having a whale of a time! 🐋 pic.twitter.com/AFITDGhNwO

And here is the footage of the aerial acrobats in action.

Young wasn’t the only one lucky enough to capture a murmuration this week, as RTE journalist Phillip Bromwell caught an equally spectacular moment on Sunday (though the birds weren’t having quite the whale of a time as their Belfast counterparts).

It seems the Republic of Ireland’s starling population have been quite active over the past week, as captured by eyewitnesses across the country.

A ‘murmuration’ is a mass aerial stunt with thousands of birds swooping, diving and soaring in unison. There are myriad theories as to why starlings show off in such a unique way: to create safety in numbers from predators like falcons; to keep warm as night closes in before they return to their nests; or to exchange information with each other.

Sadly, the starling population across the UK and Ireland has fallen by over 80 percent in recent years, adding them to the critical list of at-risk birds in the region. The population decline is believed to stem from modern farming techniques and the gradual loss of suitable nesting sites.