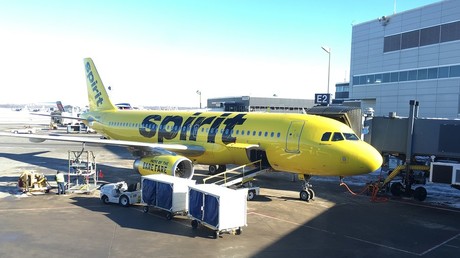 A Spirit Airlines flight made an emergency landing after a smelly sock smell caused passengers to require medical treatment. Hazmat teams arrived at the scene assess the scent.

Spirit Airlines flight 779 from LaGuardia to Fort Lauderdale was diverted to Myrtle Beach on Thursday after the unpleasant odour was detected in a section of the aircraft.

Passengers experienced burning throats and chest pains, with some children vomiting from the odor. Several passengers were sent to hospital once the plane landed in South Carolina, NBC4 reports.

Firefighters and hazmat crews arrived at the airport to assess the situation. There were fears that the smell may have been caused by some sort of dangerous chemical.

“After specific monitoring and hazmat crews entering into the fuselage no substances were found,” Myrtle Beach Fire Department Lt. Christian Sliker said. “The plane is all clear.”

The flight’s 228 passengers had to wait on the tarmac for another plane to take them to Florida.

A Spirit spokesperson told Fox News the “source of the odor is being investigated,” and the airline apologized for the inconvenience. RT has contacted the airline for further information.