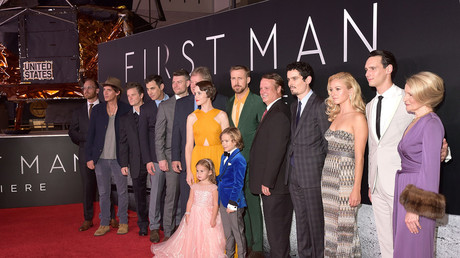 US patriots and Flat Earthers alike took to Twitter to vent their outrage following the premiere of the new Neil Armstrong biopic First Man, which does not feature the iconic planting of the American flag on the lunar surface.

The premiere was held at Washington’s National Air and Space Museum on Thursday, led by Canadian actor Ryan Gosling who played Neil Armstrong. The film documents the years building up to the Apollo 11 mission to put a man on the moon in 1969.

The film courted controversy even before its release, as news emerged in late August that it would not include the iconic moment when Armstrong and Buzz Aldrin planted the American flag on the moon. The decision was heavily politicized and even reached the highest office in the land.

“It’s almost like they’re embarrassed at the achievement coming from America; I think it’s a terrible thing,” US President Donald Trump told the Daily Caller. “When you think of Neil Armstrong and when you think of the landing on the moon, you think about the American flag. For that reason, I wouldn’t even want to watch the movie.”

This is total lunacy. And a disservice at a time when our people need reminders of what we can achieve when we work together. The American people paid for that mission,on rockets built by Americans,with American technology & carrying American astronauts. It wasn’t a UN mission. https://t.co/eGwBq7hj8C

The film’s director denied intentionally courting controversy and said it was an artistic decision meant to highlight the unseen events of this historic space mission.

“I show the American flag standing on the lunar surface, but the flag being physically planted into the surface is one of several moments… that I chose not to focus upon,” director Damien Chazelle said in response to the controversy. “My goal with this movie was to share with audiences the unseen, unknown aspects of America’s mission to the Moon.”

The Armstrong family also released a statement, saying: “We do not feel this movie is anti-American in the slightest. Quite the opposite.”

Armstrong’s lunar companion Buzz Aldrin was a man of few words, but several hashtags, with many speculating that he appeared none too plussed with the directorial decision.

Meanwhile on Twitter, patriots and Flat Earthers alike vented their ire on NASA’s timeline, with many calling for people to #BoycottFirstManMovie and #BoycottRyanGosling.

As this film doesn’t show Armstrong, bare-chested, skewering an Arab with a patriotically flaming flag of stars and stripes, whilst astride a horse painted red, white and blue, singing the star spangled banner and waving a Stetson in the air, I will not be watching this movie.

Since they refused to show the American flag, many of us will not be watching or buying this Canadian revisionist version of the first moon landing👎👎👎

Not watching this crap they literally left out the America Flag out the movie. #ChangingHistory

Trying to do flat earth damage control . It’s not working .

I don’t know what I found more triggering: the suggestion that the moon landings weren’t faked, or that those who faked it weren’t patriotic enough.

No thanks. Not watching deliberately propagandized Hollywood altering of history.