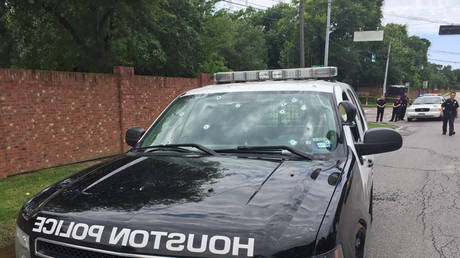 Five police officers have been shot in a residential neighborhood of Houston, Texas. The suspected shooter is dead, but at least one other suspect is reportedly at large.

One wounded officer was transported by helicopter, while four others were taken by ambulance to Memorial Hermann Medical Center. Two suspects were reportedly shot after narcotics warrants were served. ABC reports the Pecan Park neighborhood is “on lockdown” and SWAT vehicles are among those patrolling the area.

HPD responding to a scene at 7800 Harding where officers have been struck with gunfire following an encounter with a suspect. Officers are en route to the hospital. Please avoid the area and yield for emergency vehicles. Further updates will be provided as available. #hounews

We have had several officers shot please pray for officers on the way to the scene now more information to follow.